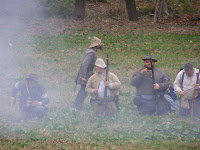 150 years ago today, there was a Battle here at Wildcat Mountain  and the Confederates were camped here at Camp Wildcat.   This ground on which which we are standing, and especially the tree covered mountain and wilderness road behind us are hallowed grounds.  Men fought and died here.  Men died in the military hospital at this very campsite.  Today, reenactors are gathered to represent a portion of the battle and remember those who have gone before us, and died to make and keep this land free.  Who died for the ideals they believed in.  And who gave us that strong back bone, that right now is all the keeps us afloat. 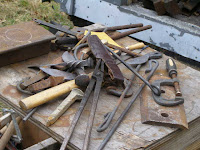 Robby and I spent most of Saturday and Sunday at the "Battle of Camp Wildcat" Civil War Reenactment.  It was so much a feeling of home to me.  LOL, yes, I use to reenact at Cowtown all the time as a teen, and prior to that would dress the part every museum and living history site I went to.  For Robby, it was finding a place where he could do his work and have some fun at the same time.  Something different every year to look forward to.
It was a surprise though to me that he would get so into it. 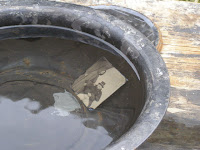 So, we are setting about getting our personas together for the reenactments, as Robby prepares for shoeing school as well.  What a life these homesteader/traveller/missionaries shall be living.  And 90% of all this has been Robby's idea.  Tis so fun, but hard work as well.  Saving, Saving, Saving, for this life we plan on living.  We did spend a wee bit on an old "tin type" picture, which is actually not tin but silver.  Only type of photo that comes with a life time promise   They just don't make things the way they use to. 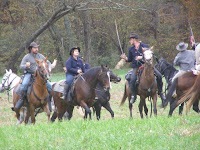 If I were to say anything to you, my readers, my fellow traveller friends, and those who read around the world, see if there is any sort of historical reenactment in your area, whether you take part or just watch, tis an experience of a lifetime for all who go.  ^_^  And have fun!!!

The southwest in my blood...

My mom, aka my birth mom, was born in Colorado.  I was born in Western Kansas.  The western soul and the winds of the west flow in my very being.  After living a wee over 2 years in Dine Bikeyah, I can honestly say, you can take the woman out of the Southwest, but you cant take the Southwest out of the woman.  Homesickness for the West aches in my heart.  The slower, rancher pass of life, "Rez Time" if you would, beckons me.   Soon my heart,  you will at least have a visit.

What is this adventure before me?

As Traveller Gal, I have gone through so many changes and grown so much in these past nearly 10 years.  I have survived great sorrow, I found true love, I have journeyed to Dine Bikeyah and long to return, I have learned about my place on the journey-task.  Yet Iosa still has many surprises on the trail.   I had longed to travel, and now I have more than I could ask.  Yet my heart longs for a time when Traveller Gal can rest and share hospitality to others weary along the road.

For now, I have found great joy as a caregiver.  4 nights a week I journey in my new to me car, a Dodge 2002 Neon named "Stormy", to a home, fix dinner, clean house, and make sure the ladies I work for are cared for.  It is reverse hospitality, for it is their home, but I am caregiving for them.  ^_^  I love the work, but the 4 nights a week sleeping on their sofa with my sheet, gypsy blanket, and two pillows is wearing on the soul.  But then again, I get a 3 day weekend every week.  Hee,hee! 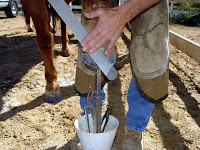 Robby is looking into a school for shoeing horses starting new classes this spring.  If he does  get in, we will be 1 year and 36 weeks longer returning to the Rez, but we would be returning better prepared that is for sure.  One of my co-workers is encouraging me to looking to training as an RN.  That part I am still praying about.  So many twists on the road.... but Iosa is in control.

Posted by Unknown at 1:05 PM No comments:

When one is a Traveller Gal, life is always an adventure.  Even if you are staying in the same state, you never know where you will be from one day to the next.   Tis a trip to not know what bed or sofa you will sleep on from night to night.  True, I have my bed at home to sleep in, but work takes me from house to house to care for others, and if they sleep I may as well.  ^_^   More soon to come including on my new wheels,
"Stormy", the 2002 Dodge Neon.

Posted by Unknown at 1:46 PM No comments: