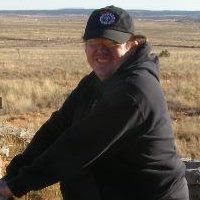 Robby, better known as Punkmister or Jesus Freak, is my husband.  He is a child of 1969, and is 13 and 1/2 years elder than I, yet we are as much one as if we had been born the same day, diffrent at times as our tastes in music maybe.  We were married in December of 2007, and have been journeying together for 4 years now.  Prior to that, we had been friends for nearly 3 years before we got closer.

Robby is a deep thinker and a joker at the same time.  When he sets in his mind he is going some where and is called to minister some where, he will keep working towards that no matter how long it takes or how diffrent it looks from what he orgianally thought.

Such is the case with his calling to Dine Bikeyah, as it took him 14 years from the time of his calling till he moved to the Navajo rez, to accomplish it.  Now as he is living it, it looks much diffrent than one would have thought.  But still faithfully, nearly every summer until he got out here to stay, he would return to BABR to work.  Every summer from 1995 on, would see him faithfully in Dine Bikeyah.  No matter where we journey, Dine Bikeyah is always home!