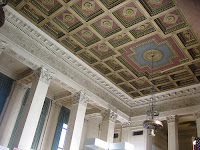 Here we are in Chicago and my head is spinning.  It was a little over a month ago we were resting against our bags at the St. Louis old Union Station, waiting for our bus and the call came.  "We have a room and an opening for you in P12! Can you be here by weekend of the 8-12th?"  Umm...sure.  Thankfully we packed most of our stuff BEFORE leaving for camp, as that gave us 3 days to pack and head out.  After I got off the phone, Robby and I laughed.  So the journey continues.... 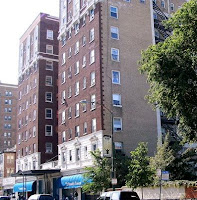 As soon as we could get a van, we packed up.  There were only two seats, so we unfolded our dorm chairs behind the driver and passenger seat.  Thankfully Robby's dad is good enough driver, no one even looked twice.  So we arrived in Chicago, on a misty, hot, humid afternoon.  Our host family, Skot and Rachel, had been ill, but Skot did his best to help us get settled.  The room 505 is just a small studio with the shared kitchen down the hall, but it does have its own bathroom.  So after a quick paint job and a matrice pulled in, we were ready to go.  And go we did, Robby has a job as a janitor and I am overseeing the computer lab at the homeless shelter.  My favorite things: Unique Thrift Store and the Free Store!  Like that is really a big surprise. 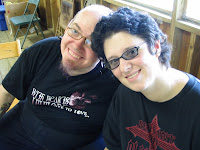 So, we headed to Wildwood Lake and P12 began middle of September. It was a blast!  The second day I swam the lake from one beach to the other.  ^_^  The cool water and fishys nibbling at my toes was soooo refreshing.  The bible training was so good.  It was just wonderful to be preparing for what ever journey God has before us.

Posted by Unknown at 1:25 PM No comments: